In order to not have to delete advertisements, the Atricis Staff cycles advertisements into this forum at the start of every new year. This keeps the main forum tidy, keeps active sites as the main focus in advertising, and allows advertisers to be able to post fresh each year instead of hunting down an old advertising thread. 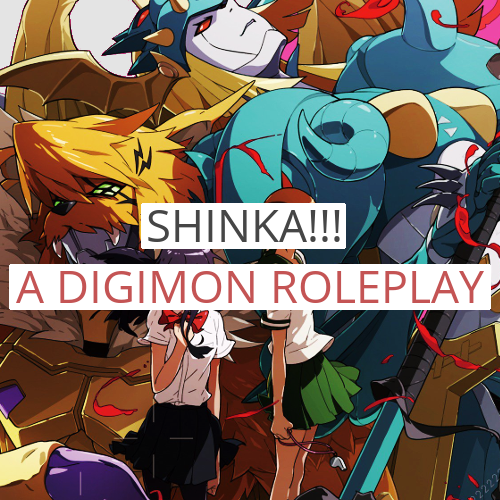 Shinka!!! is a stats-free Digimon roleplay where we emphasize storytelling, character development, and player freedom. Evolution and cool powers aren't locked behind post count requirements. Roleplay as a variety of character classes, including D3-wielding Chosen, Xros Loader-slinging Hunters, and even solo Digimon. Join us for our first episode, where Digimon seek to bridge the Digital World and the real world.

Three months ago, people found themselves suddenly transported to a strange new world, some when the popular VRMMO "Digital World" went into maintenance mode and others through "Labyrinth Events", where people have reported seeing areas suddenly "digitize" and strange creatures.

At the top of Infinity Mountain on File Island lies a recently-constructed palace. A Hackmon with a Crest of Light, present during the first Labyrinth Event, believes that the Digital World is actually an illusory reality, and the "real world" is the one that humans came from. Now, she seeks to create a permanent bridge to cross into the real world, promising any human who comes to her aid a way home and salvation to any Digimon who help.
Top
Post Reply
1 post • Page 1 of 1

Return to “Past Advertisers”